One of the significant methods of treatment under Kaya Chikitsa (internal medicine) is Panchakarma. Here are some important features of Kaya Chikitsa.
Ayurveda : Ashtang Ayurveda : Kayachikitsa 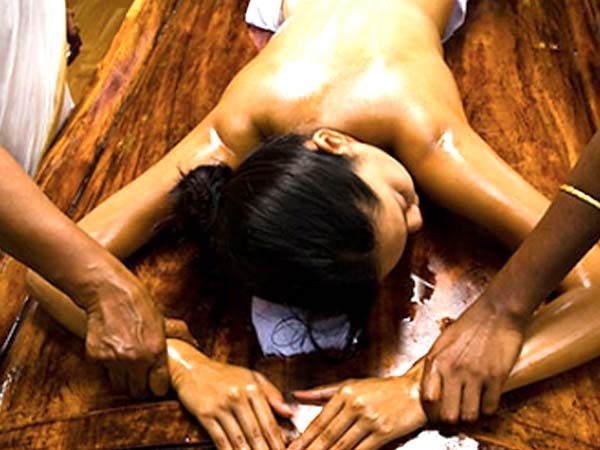 Ayurveda is the holistic approach, which is mainly concerned with the treatment of the body. In the process, the person undergoes a change in the lifestyle, which includes change in food, clothing and sometimes even residence. Ayam and vyayam, yogasadhana and gati are some of the vital components that are included in an ayurvedic treatment. Coming to kayachikitsa, it is the first branch of Astanga Ayurveda or eight-branched Ayurveda that deals with general medicine. The total treatment procedure is called Kaya Chikitsa (or internal medicine), wherein kaya means 'body' and chikitsa means 'treatment'.

Kaya Chikitsa mainly deals with the diagnosis and treatment of a variety of general diseases, such as skin disorders, diabetes, tuberculosis, rheumatoid arthritis and many other disorders. Charaka Samhita is the most important scripture on kayachikitsa. It discussed the basic principles of treatment, various types of therapies and purification or detoxification methods. According to this natural treatment, the body of a person is product of the constant psychosomatic interactions and diseases caused are due to the imbalance caused in the trishods of the body. This imbalance caused in the three doshas of vata-pitta-kapha is sometimes, caused by the mind and occasionally by the body's dhatu (tissues) and mala (toxin deposits). It is then that the kayachitikitsa branch of ayurveda comes to assistance.

Kayachitikitsa is the branch of herbal and holistic medicine, which delves deep into ascertaining the root cause of the illness. The entire Ayurvedic therapeutics is based on the concept of Agni. The concept of Kaya (Agni) is unique and is responsible for bio- transformation. As it is known that energy can neither be created nor can it be destroyed. In human body, Kaya provides the necessary energy for all bodily activities. The energy provided is derived from the food we eat and the air we breathe. The biological system of the body transforms this energy to one, which is utilized by the cells.

The Treatment
There are six stages of the development of disease are enumerated as aggravation, accumulation, overflow, relocation, build up in a new site and manifestation into a recognizable disease. In kayachikitsa, there is always an opportunity to stop the disease at each stage, thereby preventing its full manifestation. One of the significant methods of treatment under kayachikitsa is panchakarma. In this procedure, the body is purified and cleansed from the vitiated dosha to achieve the state of homogenizes and happiness. In short, this method mainly deals with reversing the disease path from its manifestation stage, back into to its site of original development, through special forms of emesis, purgation and enema.

Rejuvenation - Kaya Kalpa
Another unique aspect of kayachikitsa is rejuvenation also known as kaya kalpa. The term kaya kalpa is principally defined as the renewal of body. According to Ayurveda, the human body is made of seven types of dhatu or tissues structures - plasma, blood, muscle, fat, bone, marrow and reproductive fluids. To prolong the youthfulness of the body, kayachikitsa applies several physical and mental disciplinary methods with special medicinal preparations, to rebuild the body's cells and tissues after the initial process of detoxification, through panchakarma.